When I was growing up we had an Atari and then we moved up to a Commodore 64. I was playing games and doing some BASIC programming on both of these computers. My dad and my brother would play along with me. However, I don’t ever recall my mom playing a video game with us.

That’s why it was quite a surprise to see that she had bought a Nintendo Wii earlier this year. She wanted to get it so she could do some exercise and Yoga on it. She bought the balance board for it and called me over to help her set it all up.

So now, my mother and I play video games together. The strange thing is that I don’t even have a console of any kind at my place. I don’t play games on my computer either. The only place I play video games these days is at my mom’s house. Who ever thought I’d be in my thirties and saying that?

I thought it would be nice to enhance her gaming experience. So when I saw this in the store, I knew it would make a perfect Christmas present. 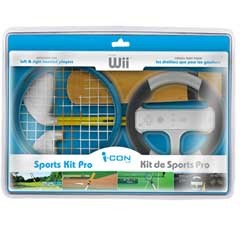 It comes with all sorts of accessories that the video game controller fits easily into. As such, you can easily turn your small television-sized remote control into a golf club, tennis racket, baseball bat,  or even a steering wheel. 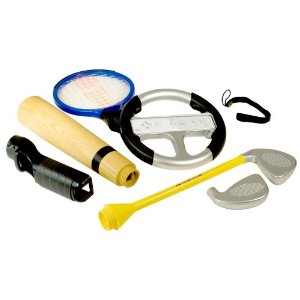 We had a lot of fun playing the video games this week with these new toys. I tell you, it is so much nicer to be playing the golf game while holding something that looks like a golf club as opposed to the regular little controller.

My mom loves her gift and I know it will get a lot of use as the family gets together to play baseball or golf in her living room. (Again, who thought that I’d ever say that?)

I’ve told two stories now about gifts that I have given this Christmas.

Do you have any gift-giving stories you’d like to tell.

I’d love to hear from you.

A Baseball Bat, Golf Club, and Tennis Racket to Use in Your… Livingroom?

3 thoughts on “A Baseball Bat, Golf Club, and Tennis Racket to Use in Your… Livingroom?”