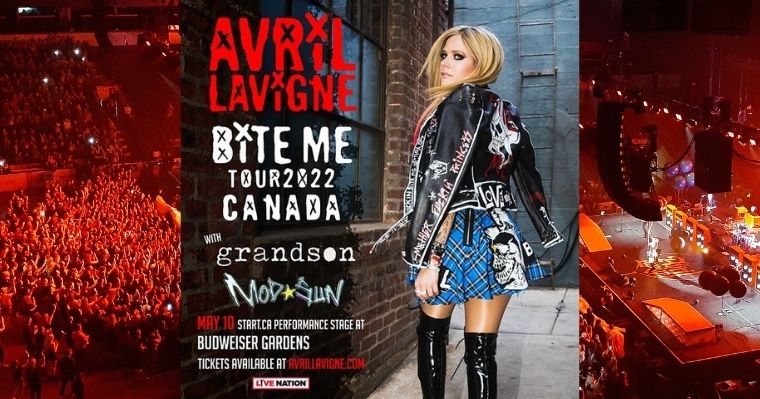 Last night I had the pleasure of seeing Avril Lavigne in concert for the third time. She always puts on a great and did not disappoint with another spectacular performance.

The last two times I saw Avril in concert, I had great seats. This time, I was sitting at the very top row and off to the side. This vantage point was interesting for a few reasons – it let me see the stage being converted from the opening acts, and I could see when Avril made her entrances and exits.

And what a cool entrance. Avril recreated the album cover for Love Sux and started out with the opening track.

She commanded the stage. There is something about live music that just captivates me. It’s great to see a performer who loves the craft too. She launched balloons, streamers, and confetti into the stands. She played guitar and even got behind the drums for a song while she played and sang.

I wanted to get some better pictures but that is difficult with just a phone when you are so far back. So I borrowed these ones from Riss Essensa’s Instagram.

Mod Sun opened up the show and had an incredible performance. He came back out during Avril’s set to perform one of his songs and they were so cute together on stage. He definitely won me over.

Grandson was the second act of the night and he hyped up the crowd as well.

So this is what my Avril Lavigne concert history looks like so far.

Black Star Tour – October 22, 2011 at the John Labatt Centre in London, ON Canada

I’m a Day 1 fan and would definitely go see her again! Such a great show! I had a blast singing along to every single song.

Kelly Clarkson / The Fray in Toronto