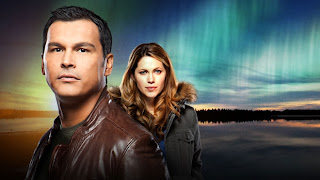 I like uniquely Canadian television and that is precisely the reason that I have been enjoying Arctic Air.

Arctic Air is an ensemble drama that can be seen Tuesdays at 9:00 on CBC. The show is set in Northern Canada and revolves around a small airline that has outdated planes. The pilots must navigate through the tough weather, small dirt runways, and small communities.

It is nice to see First Nation characters on prime time television. Adam Beach plays Bobby Martin, and at first, he’s not a very likable character. He seems to be more concerned about making money than having any connection to his hometown or to his people. (Spoiler Alert)

Bobby comes back to negotiate a mining deal with a local land owner. Just when it looks like he is about to sell out his friend, he has a change of heart and does the right thing. When he finds out that the airline that his now deceased father had founded is in a bit of financial difficulty, Bobby decides to stay and help out the struggling airline.

I’ve really been enjoying the show. The pilot episode didn’t completely blow me away. It had a few lines of contrived dialogue but it did help set up the theme and mood of the series. The second episode is where things really started to gel and last week’s episode was full of suspense and great drama.

It’s rare that we get such uniquely Canadian programming on our televisions. I think we need to support shows like this; shows that put First Nation peoples in the spotlight, shows that tell our stories and are set in our country.

If you have ever had to travel to Northern Canada, this series will bring back memories of riding in those small charter planes. If you haven’t, you will get a nice glimpse of what it’s like to live in a remote area of the North.

I hope you give this series a chance. The fourth episode airs tomorrow night at 9:00 on CBC. You can also catch full episodes online at CBC.ca.