Last week, I had the honour of interviewing Portland Oregon’s rap group Animal Farm. I have transcribed the interview for my blog but you can download the podcast for free or stream it with the player below. We had a lot of fun on the radio and I hope you will check it out. 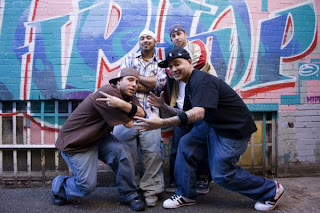 All four members of Animal Farm were on our phone lines. I haven’t always identified the voices here in this transcript. It was an intense thing just putting this all together in text form. Perhaps, I will go back and clear it all up in the future. For now, just enjoy the interview. I know I sure did.

Gamma Krush: “Yo! What’s going on everybody? This is Gamma Krush, aka L. La R and right beside me is my man Chase March. And who do we got up on our phone lines today?”

“What’s up I’m Hanif. Animal Farm, Focused Noise. What up!”

“Gen.Erik Animal Farm, still waiting on Fury, he’ll be here at some point.”

Kwils: “We sent him on a sandwich run he probably should be here pretty soon.”

Chase: “Alright sounds good, this is Chase March. We’ve been enjoying The Unknown, fabulous album. Definitely mad props for that. Just wanted to start off with the name. Did that come from the George Orwell novel?”

“Never heard of it.”

“That was your idea.”

Chase: “Well I was just wondering because the novel was an allegory where animals overthrow the human owners of a farm. And I thought when I first heard your name maybe you were taking it as a metaphor on how you’re overthrowing the recording industry to do your own thing.”

Gen.Erik: “Yeah, ya know, there’s a socialist worker bee kind of message there for sure.

“Yeah, I guess you pretty much hit it on the head. We’re trying to stand out in an industry that’s become pretty cookie cutter. And there’s definitely a formula there that you hear on the radio. We’re trying to do something different.

Chase: “Yeah, you have your own formula though ‘cause it almost sounds like the album is a concept album. ‘Cause all the way through it, it’s very nostalgic. There’s lots of throwback references, even your samples, ragtime kind of sounds and blues, and your references. I guess that’s deliberate on your parts, eh?”

Animal Farm: “Yeah, definitely. I mean we all come from pretty diverse backgrounds, especially musically, ya know, from what we grew up on and what our parents will play for us and stuff like that. We all kind of wanted to bring our own thing to the table and make some fresh new hip hop out of it.”

“People call what we do ‘true school hip hop’ just because we’re trying to bring it back to that old skills hip hop. You know, the golden era like the 90s stuff where everybody was really putting it in trying to push the envelope on music. So we are just trying to keep it true to the art form.”

“Yeah, I mean I don’t know if it was a concept album per se. I just think that it’s kind of our influences. But we are trying to take what we grew up with and love and move forward with it. We’re not trying to go back to the nineties or anything.”

Chase: “Yeah definitely. I just pick up the nostalgic vibe all the way through it. It’s kind of interesting all the Roaring Twenties kind of slang and references you put in “Ragtime Gal” like make whoopee and jig, and chick, and ragamuffin, and all these outdated terms but you make it sound fresh. Maybe it’s just the delivery but it has that old school vibe but still like current relevant hip hop, which is nice.

Gamma Krush: “Wait, hold on, hold on! Ragamuffin, I thought that was Jamaican, though, man, Come on now, that’s twenties?

Animal Farm: “Yo, yo! That song was actually a lot of fun. It was one of the funniest songs for us to write. We did do a little bit of research on slang from back in the day and stuff. Ya know really, it’s kind of like this eh? (draws out his voice in imitation)

Chase: “Yeah, the vibe of it is really, really cool. So I think we need to drop that right now for our listeners and play that song. So this is Ragtime Gal by Animal Farm off the album, The Unknown.”

Chase: “Okay that was Ragtime Gal by Animal Farm from the album The Unknown. We’ve been spinning them on Dope FM for a while now. So you guys have to be familiar. If you’re not, well I think there not unknown anymore ‘cause people are hearing ya, especially up here in Canada.

“I hope so. We appreciate your support too. Thanks for playing Animal Farm.”

Animal Farm: “We got another member that just came into the room. Say what’s up?”

Fury: “Yo what’s up, I’m the extra member. They call me backup talent most of the time but-”

Fury: “I don’t really listen to these guys. Yeah, but my name’s F1, Animal Farm. Definitely stoked you guys are interviewing us. I hope it’s been good so far. I hope these guys didn’t really treat you bad like they usually do.”

Chase: “No, it’s been all good. So, the title The Unknown seems like a misnomer because you’ve got some known artists in your corner, and you can see that on your myspace page. But just the fact that you got KRS-1 spitting with you guys on Peace, which is a really nice track. How did that come about?

Animal Farm: “Well, throughout the years, when he’s come up here to the Northwest, we’ve been lucky enough to open up for him just about every single time that he’s been up here, since like 98 or something. He got at us through the promoter about wanting to get down after so many years. We always, of course, wanted to, ya know without a doubt and when it came in our laps we just went for it as hard as we could and it finally happened. It’s a dream come true, ya know?

Chase: “Nice! It’s a good fit though. Just the way you guys spit and your style. It just seems natural that he’s on there. It doesn’t seem like ‘Oh, let’s get a big name guest and put him on our album like a lot of rap artists are want to do these days.’ It seems natural.

Animal Farm; “We wanted T-Pain but he asked for too much money. (laughs) So we figured, ya know, let’s go with someone we really respect-”

“We had to settle for Kris for sure.”

Chase: “Awesome. Yeah, I like how you’re in touch with what we call the ‘real hip-hop’ up here on Dope FM because ya even shout out that, ‘It’s for the heads not for the fakes. For the scratches, blends, and for the breaks,’ which is definitely nice.”

Gamma Krush: “Yo, that first joint, “We Came to Rock,” that’s the one I’ve been blasting for the past year. Shout outs to Specter for hooking me up with that whole piece and what discovered me to y’all.

Gamma Krush: “Yeah, “We Came to Rock,” that’s my joint right there.”

Chase: “Should we play that one?”

Chase: “Alright, let’s spin that. Alright, you guys want to throw to that?”

Chase: “Alright this is We Came to Rock by Animal Farm. We’ll be back with more from the group and the talkity talk, right here on Dope FM.”

That was Part 1 of the Animal Farm interview. Stay tuned here for Part 2 tomorrow or download the podcast of the radio show.