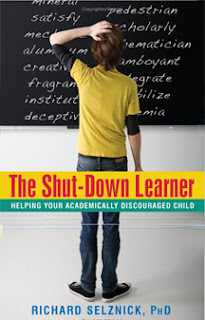 Today, I am talking to Dr. Richard Selznick, author of School Struggles: A Guide to Your Shut Down Learners Success. This is Part 2 of the transcript of our radio interview and podcast. You can go back to read the first part of the transcript now, stream the entire show with the player below, or download the podcast now for free.

Chase: “In this book, you take a little bit of a shot at the parents that have a case of NBD – No Backbone Disorder.”

Dr. Selznick: “I’ve have had a bunch of interviews about this book, but your the first person to look at how I’m taking a bit of a swipe here and there. I try to inject good humour into the book. Just a little teasing, ya know?

I recently wrote a blog post about parenting resolutions and talked about No Gumby-parenting. Gumby was a rubber toy with no backbone, that’s where NBD comes from. I find that a lot of parents try to be overly nice. They have no backbone or no spine when it comes to kids. You don’t want to go all 1950s on them, no Mad-Men-parenting either. There’s a middle ground.

So many parents are overly nice and syrupy. They have to have a little bit of teeth in there.

Chase: “I don’t think we can give our kids everything too. You mention this in the book about having times where you unplug. Don’t just play video games or watch TV all the time. Go outside and do things. And let your kids know that they have to work for things.

There is this instant gratification in this day and age. It’s how we live now. When I was a kid, if I wanted to find out something I had to look in a card catalog, and then go find the book, and then find the passage or page I needed, and sometimes that wouldn’t be what I wanted so I had to do it all again. Now, we can have an answer within seconds from wherever we are with our smartphone of computer by Googling something. It just goes to show that in this day and age we have instant gratification.

The way school is built too, and you mention this in the book. is that it’s built around the sense of a delayed gratification. You got through school for however many years, and then you’ll get a job, and then you’re life can start. You have to wait, you have to wait, and kids aren’t used to waiting.”

Dr. Selznick: “You raise so many great topics. I’d love to talk more with you. We could focus on just one topic. The electronic stuff is interesting though. I say this as I’m on an iPhone with an iPad in front of me. I’ll go on the computer later.

I see kids come into the office, little kids, like 5, 6, and 7 years old who come into the office and it makes me sad. It used to be that I could hand them some old school toys while I was talking to the parents. Stuff like little figures for them to play with and set up a scene. The kids look at me like, ‘What is this junk you’re giving me? I have Angry Birds on my iPhone. Why do I want to play with this junk?’

It saddens me. There was a time when playing with those figures was creative and you had a little imagination in there and you might have thought about going outside after school. I don’t see that much anymore.

Chase: “When I was a kid, I was playing outside on my own. It’s weird that now it feels safer if you are with them. So I can maybe understand why some kids aren’t out doing anything because if they are inside sitting in the basement playing video games, at least you know they are safe.”

Dr. Selznick: “I guess. I didn’t grow up in a difficult area but I did grow up in New York in a relatively nice area. Staten Island. I can remember going out the door on Saturday morning and eight hours later with one interruption – ya know going inside to grab a sandwich, eight hours later we were coming back in reluctantly. There was no parental steerage or involvement, no one telling us what to do or how to do it. I think we’re really missing something from that these days.”

Chase: “You talk about a couple of things we are losing, one of which being social interchanges. When we were kids, if we wanted to call on our friend, we had to knock on the door and a parent would answer. We could call on the phone, a parent would still answer and we’d have to say, ‘Hello, Mr. So and So’ and have that pleasantry. But kids don’t do that any more because everyone has their phones so they just automatically text or talk to each other. You call it a sense of social invisibility.

Dr. Selznick: “I have two kids and we went through effectively eight years of high school with them, a time where you are supposed to be calling your friends. I’m sure you remember doing that. I think the phone rang here during that time, maybe 3 times. I joke, bypass the middleman. Why bother with the annoying parents?

It’s like “Leave it to Beaver” where you had to say, “Hi, Mrs. Clever, it’s Eddie Haskell.” You can to lay it on a bit and learn that skill. 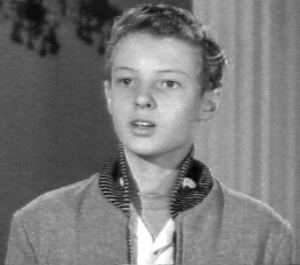 For eight years the kids were called directly, so we never really said hello to them on the phone.

People can blame us, ‘Well, why give them cell phones?’

Chase: “We are totally in a different age. I think we kind of have to roll with it.”

Dr. Selznick: “I think that’s true. We can’t just keep bemoaning it. But I do think we need to recognize that there are these loses and we need to be realistic about what those things mean, both academically and we as inter-personally.”

Chase: “I agree but there are a lot of things we can teach. One of the most important things a teacher can do is to be a good role model. Address other teachers by name, use Mr. and Mrs, be polite, and show those interactions that people should see.

You have a couple of rants in the book, one of which we’ve already discussed, but one of my rants right now is about Family Channel. When I was a kid, Family Channel was pretty tame. But now I watch it and they have these teen-type sitcoms on all the time. My beef with these programs is that they feature characters that are genuinely mean to each other, underhanded, backstabbing, and quite frankly rude. If that is the role model and that’s what they are seeing so they think it’s normal and that you don’t need to be polite and you can get away with this kind of thing.”

Dr. Selznick: “The thing that used to concern me was the sexual undertones and innuendos. I’m far from a prude but I like that protection of childhood from ages 4 to 12. They shouldn’t be watching R-rated movies because they are for older people. But I find a lot of what they call “family entertainment” has a fair number of innuendo and double entendre jokes with sexual themes. Do you find that?”

Chase: “I certainly do, and it’s a shame. It’s like the media is making these programs for adults. I find a lot of the adult humour is immature to begin with. It’s not adult to me. It’s just so immature.

I was bored the other day and I put TV on something I wouldn’t normally watch. I left it on and watched three sitcoms in a row. I swear I could feel myself getting stupider.”

Dr. Selznick: “I know what you mean. I watch Family Guy and I think it’s a funny show but it blows my mind that 7 and 8 year olds watch it. They shouldn’t be exposed to that kind of content.”

Chase: “I think there is content out there for every age group. I think we should monitor that closely. I believe it’s a parent’s responsibility. And as a teacher, I ask my students, ‘Why do you watch that?’ I call them out on it. I wouldn’t even watch that, but I guess I can understand people having different tastes. It’s an interesting position that we are in, trying to guide the youth and help them learn through our experiences as well.

It’s cool that you wrote this book. I hope people will check it out. It’s called School Struggles: A Guide to Your Shut Down Learner’s Success and it’s by Dr. Richard Selznick.

Thank you for talking with me.

The Mystery of the Internal Clock