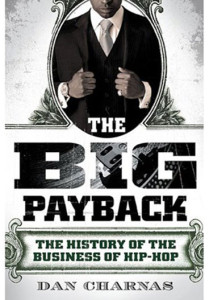 The Big Payback: The History of the Business of Hip-Hop by Dan Charnas

I’ve wanted to write a book about hip-hop history for some time now. This is the book that I wanted to write. It’s simply brilliant. It’s captivating. And it’s a page-turner.

Dan Charnas weaves a narrative  to illustrate the growth of hip-hop music from the 1940s right up to the present day. It reads like a story even though this is a work of non-fiction.

And the title lives up to its name. It’s no small feat to tell this huge story. That’s why the book clocks in at just under 700 pages. But it is such a compelling read that it never feels like a chore. I whipped through this book in three weeks.

Here is some of the knowledge that gets dropped in this amazing book . . .

Hip-Hop didn’t start out as a recorded music form.

Rick “Rubin was shocked by how much better hip-hop was in person than record. The cutting by DJs like Jazzy Jay and performances by MC crews like the Treacherous Three exploded from the stage . . . Their gigs sounded nothing like their records, which by comparison sounded liked canned disco music with a bit of rap thrown on top. Live hip-hop, to Rick’s surprise rocked!”

Pioneers like Rick Rubin brought that live energy to hip-hop recordings and forever changed the game.

“Rubin wanted to conjure something that he hadn’t yet heard in a rap record – parity between DJ and MC, in the same way that rock records might feature the singer and lead guitarist equally.  So Rubin arranged breaks in T La Rock’s lyrics, and in the spaces had Jazzy Jay cut not one, but two turntable parts – playing off each other almost as a rock band might have rhythm and lead guitar. Last, Rick Rubin gave equal billing to T La Rock and Jazzy Jay.”

For the love of the art!

“Other record companies made rap records for money.” But Rick Rubin helped create a company to make” an implicit statement . . .  [that] Def Jam’s name and packaging made a novel promise: it would be a label by and for hip-hop fans.”

Rick Rubin is one of the hip-hop pioneers who truly cared about the art more so than the business of hip-hop.

Of course, hip-hop is a huge business and it has taken all sorts of twists and turns in becoming the dominant culture of popular music today.

I really enjoyed this book and I think you will do. It’s a must read for any hip-hop fan!