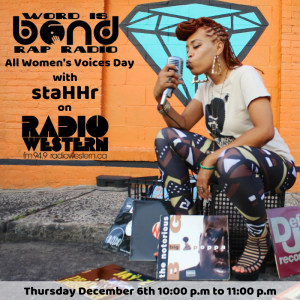 Every year, on December 6th, Radio Western dedicates 24 hours of programming to “All Women’s Voices.”

Word is Bond Rap Radio proudly takes part in this special day every year. We have brought you spotlights on Skulastic, Eternia, Intelligenz, and Nilla.

Today, we present staHHr in her own words. She has been holding it down on the microphone for quite some time now. Even if you’ve never heard the name, you have probably heard the voice. She’s been featured on three MF Doom albums, has dropped full length albums, and a several mixtapes.

Tune in to Radio Western all day for great content featuring music and talk focusing on women’s voices and issues.

Hip-Hop programming starts at 9:00 with an hour-long special hosted by local emcee, Sum-01. She looks specifically at political rap. After her show, Word is Bond Rap Radio presents a Stahhr spotlight, and then DJ Chase March, spins a half hour mix of female-fronted hip-hop.

And remember to tune in live for an extra two hours of hip-hop starting at 9:00 p.m.