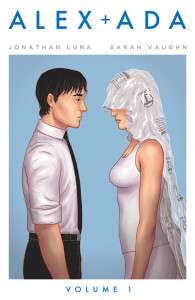 Alex + Ada is a brilliant comic book series that has been collected in three graphic novels. It is set in a future that feels not too far off from our own. 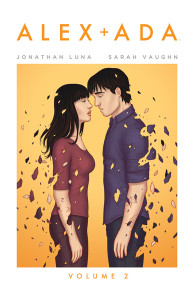 In this future, there are androids that look completely human. They are required to have a marking on their arms to identifies them as being artificial. They are very expensive so only a few well-off people own one.

One such owner is Alex’s grandmother. She uses it for companionship after the loss of her husband, Alex’s grandfather. So when he goes through an emotional break-up and is feeling very alone, she decides to give him on of these androids as a gift. 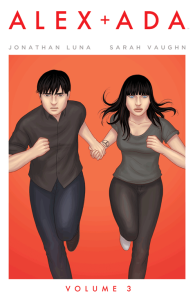 Alex is conflicted. He doesn’t really want an android. He doesn’t like the idea of using one as a sexual partner (as is the norm in this society).  But he opens up the box and is introduced to a blank slate. He was disappointed that she had no name and couldn’t make decisions for herself.  He wanted something more.

Alex soon learns that all the androids are capable of becoming self-aware. It is illegal to crack the programming as the government has strict rules and regulations preventing machines from gaining sentience. But he does it anyway.

I loved the story, the art, the pacing, and the characters. I also like how it relates to the technology we use today. Many of our devices have locks that limit our use.

This story felt strangely familiar. I bet this is a future that could very well happen. And it wasn’t scary at all. It’s a nice take on AI (artifical intelligence) and a great read!

Record Collecting for EVERYONE!

The Tenth Doctor Lives On