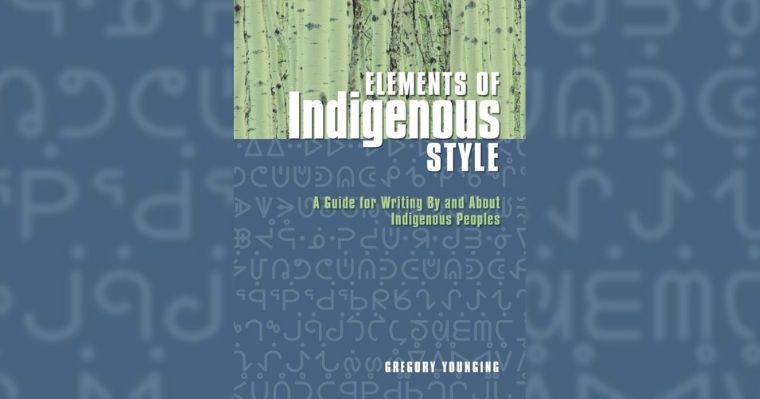 Elements of Indigenous Style : A Guide For Writing By And About Indigenous Peoples by Gregory Younging

This book is the first of its kind and a much needed reference tool for authors, writers, and creators to make sure they are using culturally appropriate publishing practices. If you are writing about Indigenous Peoples in any way, shape, or form, this is a must have for your bookshelf.

Younging covers 22 style principles, terminology that should and should not be used, how to avoid biased language, and which words and phrases should be capitalized.

Here are some interesting things I took not of while reading it.

The first novel from a First Nations woman published in Canada was Slash and it was released in 1985.

I have worked in and taught on several First Nation reserves in Ontario. I have a close relationship with many First Nations people and we often joke about “Indian Time.” While I didn’t find any mention of it specially in this book, Lee Maracle has a bit to say about it here . . .

“When you’re introducing something—I’m talking as a writer now—the first line is always the most significant. It’s the point you’re making. It’s there on purpose. Indigenous writing is about writing from the centre to the edge, to create a circle. We don’t say things in a linear way. We have long sentences and we grocery-list things with lots of semicolons. Editors with a European frame of mind, when they read that kind of writing, react that there are too many things running around in their heads. There aren’t too many things for me. It’s all connected to the first line and wraps up with the last line in a wheel of understanding. To put something into “Eurostructure,” I have to find a way of breaking it down into a line-by-line linear map. I’ll do that in some cases, but if something has gone on for ten thousand years, I’m not changing the way we say that.”

Don’t use the word artifact!

“When you see artifact, you are most likely looking at content that needs reworking and vetting. Consult the Indigenous People at the centre of the content, and ask them for the words to describe the purpose and significance of what is at issue. Do your best to be as specific as possible.“

Legends and Myths can be seen as offensive terms.

“Aboriginal is always an adjective, never a noun: an Aboriginal person, Aboriginal Peoples.”

Be mindful of words

Another solution is to include notes about words of Indigenous origin in an etymological glossary in the back.”

Great Advice for Everyone

This book is a must-have resource for every writer. It would be nice to see it in classrooms across this country as well. I learned a lot while reading it and I think you will too.