If you are not familiar with The Walking Dead, it is a story about a band of survivors in a zombie apocalypse. It’s horrific, scary, and at the same time, a really compelling read.

This three issue arc was really well done. It gave the survivors a brief respite from the horrors of the world. 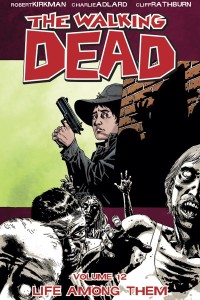 The Walking Dead:Volume 12 – Life Among Them

The survivors are camped out in the open and things seem pretty calm. They are approached by a single man who tells them they have a community they can escape to and find some respite.  It sounds too good to be true, but the group is exhausted and take him up on his offer.

Rick is appointed to be the constable of the community, and although things seem to be on the up and up, he is leery of letting down his guard. 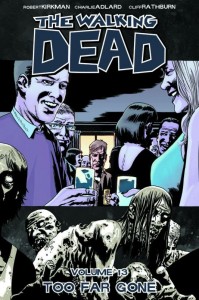 The Walking Dead:Volume 13 – Too Far Gone

Once again, the humans seem more dangerous than the zombies. In his new role as the community law maker, Rick confronts a man who is abusing his family.

A new group of hostile humans also attack and try to get through the fortified walls. The leader of the community is very selective of who he invites to stay with them. And both he and Rick know these guys are trouble. 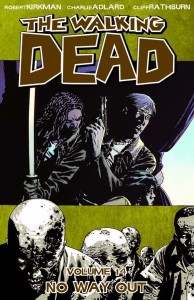 The Walking Dead:Volume 14 – No Way Out

The unthinkable happens.  A horde of undead were attracted to the gunfire that happened at the end of the last issue. They somehow manage to find a weakness in the town walls and invade the community. Things look really hopeless as they are completely overrun with the undead.

I won’t give away any more of the story, other than to say that it looks like things work out in the end. Maybe a safe community is what will keep them all alive, safe, happy, and well. A few more changes need to be made but this arc ends with a sense of hope that we haven’t seen in a while in this series.