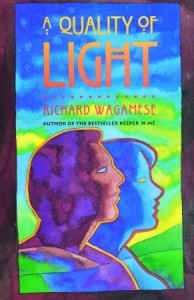 A Quality of Light by Richard Wagamese

I really enjoyed this book. It tells the story of a First Nations boy, Joshua, who was adopted by a white family. He lives on a farm, completely isolated from his cultural roots. When his friend, Johnny, starts to tell him of his warrior heritage, he doesn’t quite understand.

Johnny becomes slightly obsessed with Indians and does a lot of research on what it means to be an aboriginal. Joshua isn’t really interested in any of that. He’s happy in his adopted family and his life as it is. When he goes to high school, this all changes. He gets bullied just because he is different. He experiences racism for the first time.

Here is a great passage about how he decided to remain quiet after a horrible event that left him humiliated, battered, and bruised.

Joshua: “I already got it.”

“By not saying anything.”

“Maybe. Maybe not. See, I haven’t had a said a thing about anything. And it’s driving them crazy! They know that I know the truth but I’m not saying anything. They’re wondering why, they’re asking themselves what happened. What would they do if they were me? They’re facing the truth.”

“That doesn’t do any good. Not unless they own up to it.”

“They have owned up to it — to themselves. See, if I had charged them, they’d deny everything, right?”

“They’d be angry, threatened, and they’d deny it all. They’d find some way to convince themselves that their story was the truth. But because I didn’t, there are big questions in their minds — questions that are making them look at the real truth. Maybe if they see the truth on their own, they can change. Maybe not all of them. Maybe just one, but that’s enough.”

“They already are guilty . . . Know the truth and the truth shall set you free . . . but first it’ll make you miserable.”

“So, they’re miserable, right?” Johnny said, grinning at me and sitting down again.

“Yeah, that’s what my revenge is.”

Joshua was right. Someone did finally stand up and acknowledge their part in the bullying incident.

I’m not sure I could have this kind of courage. Not speaking the truth in hopes that it will come out any way. That would be a really hard thing for me to do. I know that I talk a lot. Probably too much, some times.

This book deals with First Nation issues and tells a great story along the way. It is uniquely Canadian and a great read.