This lesson looks at the structure of rap songs and gets the students writing their first rhymes.

You can download this Smartboard lesson for free and have some fun in your music class. 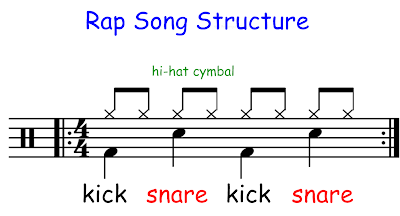 Rap is pretty much based around groups of 4. Here you see a basic drum pattern with the kick, snare, kick, snare.

Here’s a rhyme I wrote just for this exercise. 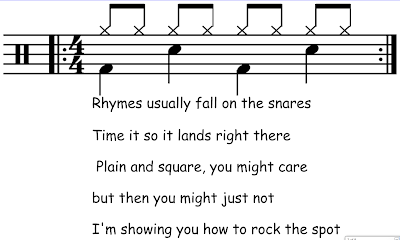 The end rhymes all come on the final snare. Here you see that I rhymed “snares” with “there” and “care”

I also placed another rhyme in the middle of the third line. “Square” lands on the first snare (the second beat)

and then I rhymed “not” with “spot” 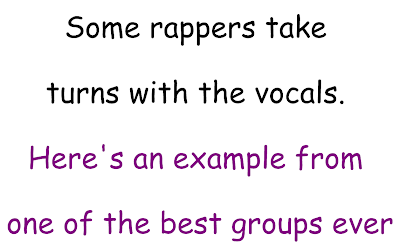 I want to get the students writing and performing songs in small groups. Today’s lesson will hopefully inspire them on how they can divvy up the verses and words when they form their own rap groups later on in this unit.

I start with some old-school Run-DMC since the rhymes are easy to follow along with and to show how the two MCs trade lyrics back and forth. 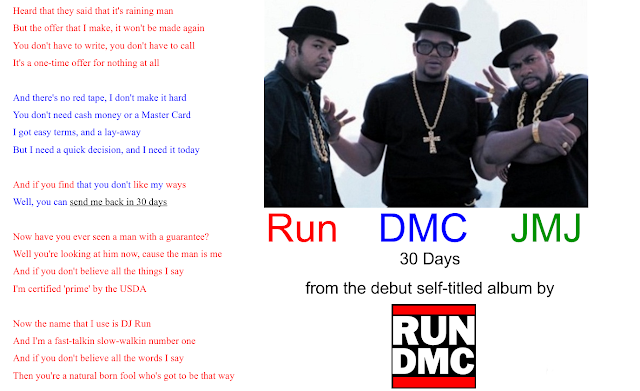 Rappers were originally called emcees and not rappers. Sometimes emcee is spelled MC as in DMC.  The term stands for “master of ceremonies”

Play the song for the students to hear and then stop it after the chorus,

Discuss the origin of the song. It came out in 1983 when there were quite a few commercials saying “And if you’re not completely satisfied, return in 30 days for a full refund.

In this song, they are saying you don’t need money or anything to rap. They are also putting out a guarantee that their music is amazing. It’s quite the clever song.

Point out the end rhymes, “man” and “again” don’t rhyme unless you pronounce them a certain way. That is called a slant rhyme. Run made it rhyme in this lyric.

are all end rhymes and land directly on the snare.

Make sure they keep a steady beat and don’t speed up or slow down.

Once the class has the beat down, have them rap the first line.

“Heard that the said that it’s raining, man”

DIVIDE THE CLASS IN TWO

Have half to the class slap their desks and keep the beat.

The other half of the class will rap the first stanza.

Then have them switch roles so both groups have a chance to rap. 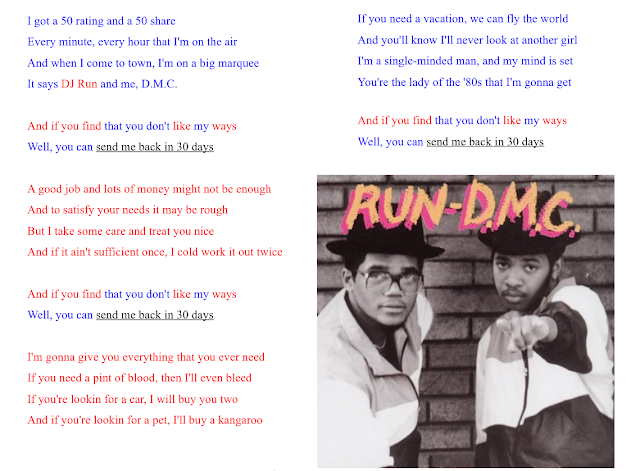 RAP ALONG WITH THE MP3

Keep the two groups you created. Assign one of them to rap Run’s parts (Red Lyrics) and the other half will perform DMC’s part Blue Lyrics)

Point to each group to cue them. When it comes to the chorus, point with your left hand to cue Run, the right hand to cue DMC, and then both hands for the shared line “send me back in 30 days”\

When the students get the hang of it, share another example of a more modern rap with them. 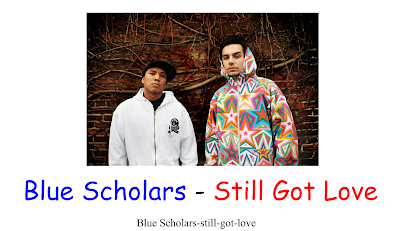 Blue Scholars consist of Geologic, the MC, and DJ Sabzi. 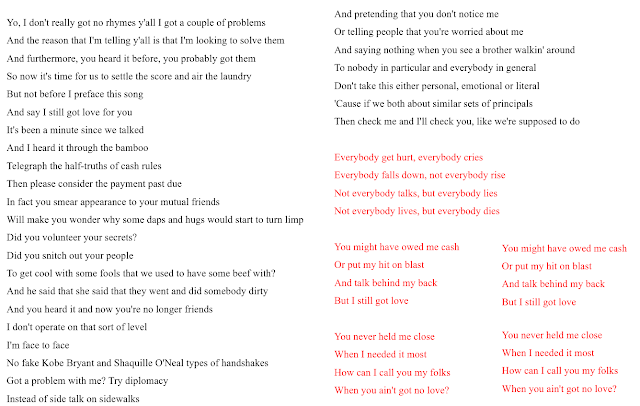 This is a really positive song and I point that out to the students.

In the chorus it says,

“You might have owed me cash” – I’d probably not be happy about that
“Or put my hit on blast” – I’d be happy that you’re playing my songs
“And talk behind my back” – rumours and gossip are not welcomed at all
“But I still got love” – shows how they are positive people and don’t need to react negatively.

I censored the song because in the chorus it says “sh*t” instead of “hit.” As rappers, we call our songs that. It’s just part of the culture and doesn’t feel like a swear word when used in that context.

The rapper still uses end rhymes in this song and they fall on the snares.

“problem” and “solve them” is a nice end rhyme

“laundry” doesn’t really rhyme with anything except “probably” a few word earlier and then he doesn’t have an end rhyme for a while.

He then skips a line to rhyme “you” and “bamboo”

It just goes to show you how creative you can be with when and where you place the rhymes in a rap. 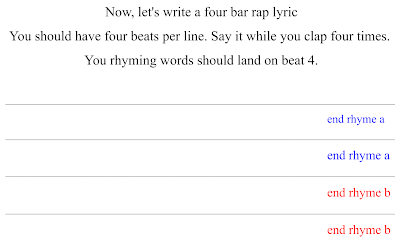 At this point in the lesson, the students will start writing their own rap verse.

Download the Write a Rap Verse Worksheet as a PDF file.

Some students will have a really hard time starting from a blank page. If this is the case, give them a starting line.

“Music class is really cool” and slap or clap to show that “cool” lands on beat 4.

Lots of things rhyme with cool so hopefully this will get them started just fine.

Give them ten or 15 minutes to write a verse or two and to brainstorm some rhyming words.

That is the first lesson of my rap unit. I will be posting the other lessons here as well.

Remember you can download this lesson to use on your Smartboard. If you don’t have a Smartboard you can always use the images in this post and a computer projector to share them with your class.

Thank you for joining me on Teaching Tip Tuesday. The archive is full of great lesson plans, tricks, tips, and ideas you can use in your classroom.

In-Depth and Exclusive with Arrested Development