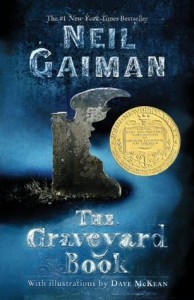 The Graveyard Book by Neil Gaiman

The story starts out with a baby escaping more than just his crib. He wanders into a cemetery and is taken in by the ghosts who live there. They keep him safe from the killer who murdered his family.

As the only living being that resides in the graveyard, he is given the power to see and converse with all of the spirits who reside there. He learns how to fade, to generate fear, and to pass through objects.

It’s a coming of age tale unlike anything I have ever read. That is probably one of the reasons it won the Newbery Award for Children’s Literature. I really like the afterword by the author as well. I enjoyed this read and hope you will too. 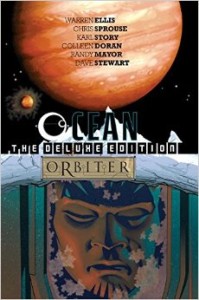 The first story is this graphic novel takes us to one of the moons of Jupiter. It is essentially an ocean under a very thick coating of ice. A moon that is compatible in size to that of the Earth. And one that has something sinister hiding under its icy surface.

The second story gets a little creepier. A long lost space shuttle returns to earth after an unexplained ten year absence. The ship seems to have had some alterations made to it. A team tries to make sense of the whole thing.

Both stories deal with exploration and the dangers involved. But there is also potential and a glimmer of hope in each. The last tale has me wanting more. I wonder what happens next. That’s the question that drives exploration after all, isn’t it?