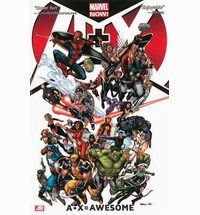 This is a crossover book that tells several short stories. Each story pairs up a member of The Avengers with one of the X-Men.

There are twelve different adventures in this trade paperback that team up the likes of Wolverine and Hulk, Black Widow and Rogue, Spiderman and Beast, and many more. It’s light fair and good for a laugh or two, not very serious reading, and not connected to regular continuity. 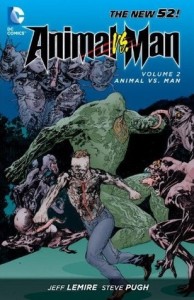 I was pleasantly surprised to see the second issue of this graphic novel in the public library last week. The first volume captured my attention with an interesting take on a super-hero family.

Buddy Baker is able to call on the power of animals around him, but his four-year old daughter’s emerging powers already surpass his own. She is destined to be the protector of The Red – the force of animal life.

The Rot is threatening to destroy all of nature. It has upset the delicate balance that has been in place since time began. Quite simply, it is death and decay. As such, this story is horrific and a bit scary, but it is a compelling read nonetheless.

I don’t normally like horror but I am enjoying The Walking Dead and Animal Man. 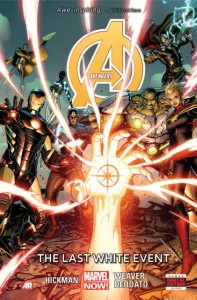 White Events have been happening since the very beginning of time. Yet, something has damaged the mechanism that controls them. As such, the system is broken and so is the universe.

The Last White Event created an extremely powerful being and it’s up to the Avengers to manage the threat. Even the Canadian super-hero team, Omega Flight gets caught up in the action. They begin fighting it but then start to protect it. What is this new system that has been brought into the world? We might have to wait until the next issue to find out.

The Divergent Series Concludes with Allegiant 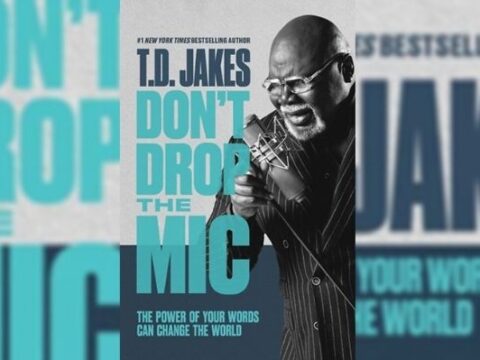 Your Words Can Change the World