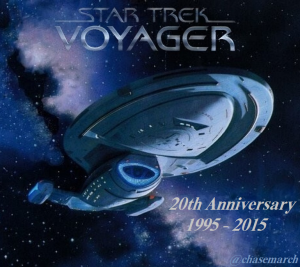 I have always been an avid Trekkie. My dad and I used to watch reruns on the original series back in the 1980s.

We then watched Star Trek: The Next Generation together. It wasn’t quite the same as the original series, but we gave it a chance and it really grew on us. It became a great series over the years even though it didn’t quite start out that way.

When Deep Space Nine came along, neither of us really got it. It didn’t feel like Star Trek and even though I gave it a chance, I stopped watching it.

Voyager, however, managed to capture the essence of Star Trek and I thoroughly enjoyed it. It was on the air for seven seasons and I watched it all the way through. I actually haven’t seen it in quite some time now. Hard to believe that it has been twenty years.

And next year, Star Trek as a franchise will mark it’s 50th Anniversary!

I hope Star Trek returns to television soon. I am not a fan of the reboot of the film franchise. I think we need a new series to help celebrate all that is Trek. For now though, we have reruns and DVDs.

I See the Finish Line but I Look Back