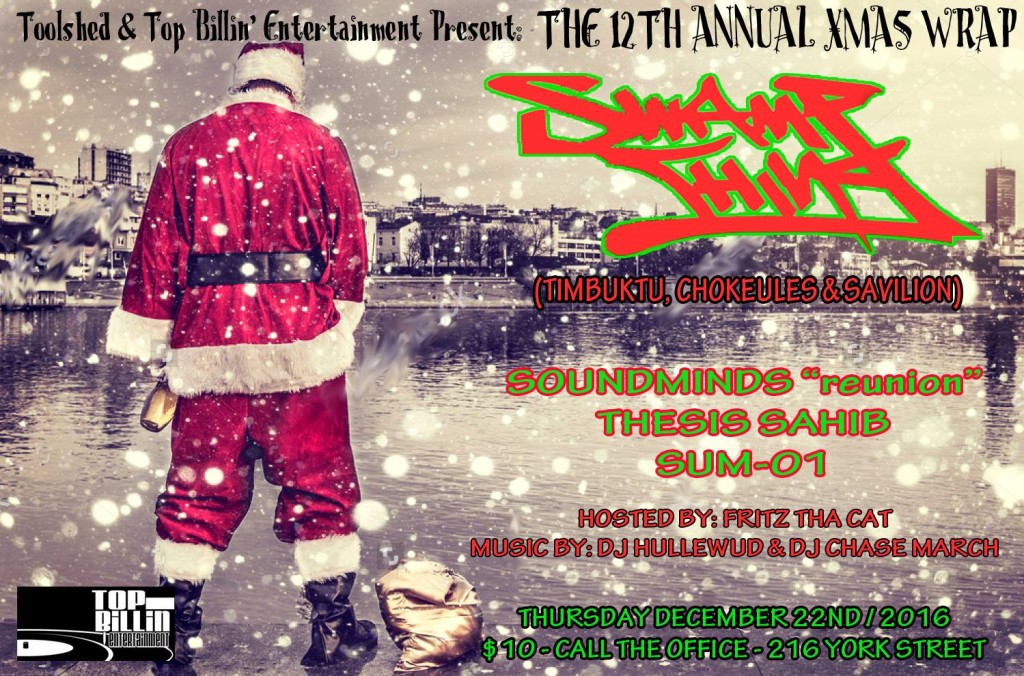 One of the first hip-hop concerts I ever went to in London, Ontario was The 4th Annual Xmas Wrap. I was strictly a fan back then and just starting my career in radio. I wasn’t really known yet, especially outside of Hamilton. A lot has happened in the past eight years. DJ Hullewud distinctly remembers meeting me at that event. It’s hard to believe that was eight years ago.

I’m glad that the event has remained a Christmas tradition for all of us. It’s almost hard to believe that I am actually on the bill this year. I am so excited. This is always the biggest show of the year. It’s nice to see Swamp Thing come back to town every year to connect with their roots and throw an amazing concert full of talented artists to a packed house of energetic fans.

This years event is special because it features a Soundminds reunion, and marks the return of Sum-1 to the stage. It’s also hosted by London legend, Fritz tha Cat.

DJ Hullewud and DJ Chase March will be holding it down on the turntables all night long too.

Swamp Thing – For the past five years Toronto’s three-headed rap monster, Swamp Thing (Timbuktu, Chokeules & Savilion), have delivered a special sonic treat every Halloween. This year is no different. Back again with perhaps their greatest achievement yet, “Pray To Science” dropped October 28th via Urbnet. Produced entirely by Savilion and Timbuktu, “Pray To Science” delivers uptempo grooves and deep pocket space-aged boom bap, born of and created for the musically creative. Digging into the pantheon of underground hip hop, the records features collaboration from Ghettosocks, Birdpares, Ambition, Wordburglar, and Nilla.

Thesis Sahib – Thesis Sahib has been contributing to the underground hip hop movement for the past 19+ years, both as an innovative rapper and a well known visual artist. His articulate, rapid-fire delivery, harmonic vocals, and imaginative lyrics have graced an impressive catalogue of sought after releases on CD and vinyl. Often combining both 2D aesthetic with circuit-bent electronic toys, compositions written on modified Gameboys, a face mask costume fitted with a heavily effected microphone, and circuit-bent sounds have become part of his music and on-stage performances.

Soundminds – The last time the legendary London crew Soundsminds graced a stage together was at the 10th Xmas Wrap event back in 2014. Fingerslim, Mr. Megaphone, and Lionize Prime will once again reunite on stage, at the same time, with a very special set of their classic tracks, along with a possible surprise or two.

Sum-01 – Fresh off her latest hiatus, it’s the offical Sum-01 comeback. The queen of London hip hop returns to the stage for the first time since the summer of 2010 to take us back in time and perform tracks off her 2008 mixtape and 2010 EP.

Fritz Tha Cat – Claiming to have retired from the rap game 10 years ago Fritz returns to the stage this year to host the Xmas Wrap event for the very first time. Fritz has been quiet musically since dropping the last OK Cobra record back in 2009, but can be heard on the new Hand Solo “Bassment Of Badmen 3” compilation over DJ Moves production….with rumours of more new “old” material dropping in the near future. 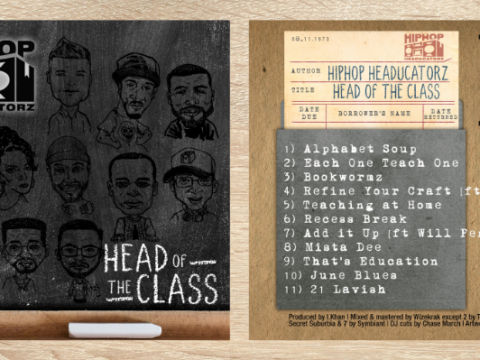